Four hundred people participated in the event, arranged by Monsey philanthropist Lazer (Louis) Scheiner at the InterContinental New York Barclay, at 48th Street and Lexington Avenue. The event literature said it was hosted by a group called the Patriotic Alliance of Jewish Americans, which described itself as “unrelated to partisan politics and beyond the political divide of Republicans and Democrats or Independents,” with a mission statement of “showing gratitude for policies and actions which benefit the Jewish People.” The literature said the event sought to “show appreciation” to Trump, as “never before have Jews, here and in Israel, had such a loyal friend and supporter in the White House.”

Noted lecturer Rabbi Y. Y. Jacobson welcomed the president. Speaking just a few days after the 81st anniversary of Kristallnacht, Rabbi Jacobson described the horrors of the Holocaust, along with the myriad other persecutions Jews have endured throughout millennia, contrasted with the great kindness of America and the friendship Trump has shown to the Jewish people. Rabbi Jacobson made the brachah “shenasan m’kvodo l’basar vadam” and translated it into English; the president then exclaimed, “I like him!”

The room erupted into chants of “USA! USA!” and, “Four more years!” as the president began his remarks. Joking that in Israel he has “an approval rating of about 98%,” President Trump said that “if anything happened here, I’m taking a trip over to Israel – I’ll be prime minister.”

Remarking about the Israeli election stalemate, Trump said, “What kind of a system is it over there, with Bibi, and they’re all fighting and fighting? We have different kinds of fights; at least we know who the boss is. They’ve been trying to do things, and they keep having elections and nobody’s elected.”

Regarding the moving of the U.S. embassy to Yerushalayim, Trump said that “every president promised it,” but he understands why they didn’t deliver – “because when I got to office, the pressure that was put on me to not do it was incredible. I got a call from every leader from every part of the world practically, but especially that part of the world” not to do it.

Discussing embassy properties, the president joked that the U.S. owns even more real estate than Ruby Schron – who was at the event – as the crowd erupted in laughter.

The president proudly noted his Jewish grandchildren, and called in his Orthodox son-in-law and advisor, Jared Kushner, for a brief wave.

Trump also discussed his recognizing Israeli sovereignty over the Golan, and his canceling of the Iran deal. He boasted about the strong economy, and addressed impeachment and what he deemed “witch hunts”: When the Russia collusion story turned out to be a “hoax,” he said, the Democrats got a new one – impeachment; when this is over, they’ll move on to another. He also commented on his pardoning of Sholom Mordechai Rubashkin, calling Rubashkin’s treatment by the Justice Department “unfair,” and saying that many people approached him about it from the Jewish and non-Jewish communities. Trump said that he pardoned Rubashkin because it was the right thing to do.

Remarking on the barrage of rockets hitting Israel Tuesday, Trump gave assurance that that country has no better friend than the United States.

Yitzy Stark, a Jewish businessman who attended the fundraiser, told Hamodia it was “an amazing kiddush Hashem.”

“The appreciation that we showed the president was indescribable,” said Stark. “He was so thankful to the Jewish community for their support and for being there for him.”
צוריק ארויף 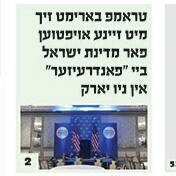